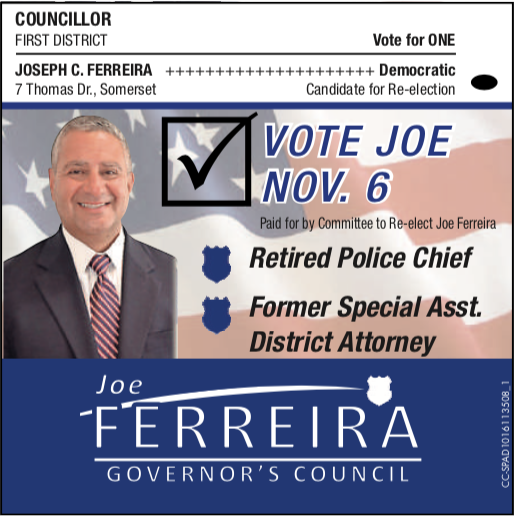 Joe graduated from Somerset High School in 1981 where he was Class President for several years and played Varsity football, including two high school super bowl games!  Joe next graduated, with highest honors,  from Bryant University in 1984 earning a Bachelor of Science Degree in Criminal Justice.  In 1985 Joe graduated from the Southeast Mass. Regional Police Academy in Foxboro, earning the Highest Academic Achievement Award.   Joe began police work in the Towns of Swansea and Berkley, before becoming a full-time Police Officer in Somerset, in 1985.  In 1992, he earned a Juris  Doctorate, with high honors, from Southern New England (now UMASS) School of Law.

Immediately following graduation, Joe was selected for a Massachusetts Superior Court Judicial Clerkship, where he served more than 20 Justices over the course of a year, in both civil and criminal sessions of the Superior Court.  Joe then volunteered as a Special Assistant Prosecutor for the Bristol County District Attorneys Office. Joe served in the Somerset Police Department for 30 years, working his way through the ranks of Sergeant, Lieutenant, Detective Lieutenant, and Chief of Police for 9 years.   Joe has been affiliated with Lynch & Lynch, P.C.,  as an Attorney,  for more than 25 years.

Joe has volunteered extensively in the community and is the proud father of three daughters, Katelyn, Julie and Danielle.

You can join us using

Created with NationBuilder – Theme by Tectonica